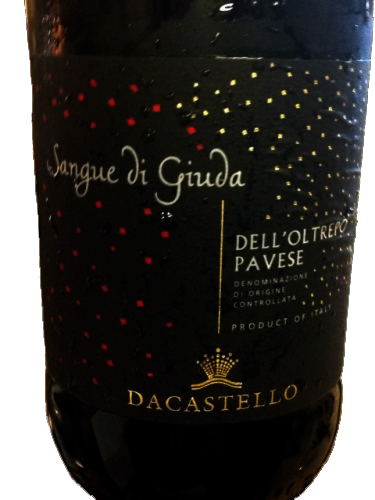 We know what you're thinking; but no, this is not the vaunted drink of the Klingons. There is sometimes confusion, like whose blood is this? Is this like communion or is this a forbidden drink?

The name all has to do with the way blends take on different names in Italy. For example, when Barbera, Croatina, and Uva Rara are mixed together, it makes sweet "Blood of Judas." Modify that slightly by adding Bonarda instead of Croatina/Uva Rara and you get Gutturnio. Gutturnio is much drier and can also be frizzante (lightly bubbly).

As a general rule, the lower the alcohol in the wine, the sweeter it is. The exception is fortified wines aka ports which are basically sweet low alcohol wines which have had alcohol artificially added in before all the sugar had time to ferment.

Sangue di Giuda fits the general rule, it is usually 7-7.5% alcohol by volume so it is has a balanced amount of sweetness and a smooth taste.

Wikipedia explains that the Croatina and Bonarda varietals may be the same actual grape but called different names when from different regions. This leads to some confusion. In any case, Judas' blood tastes similar to Brachetto from Piedmont. Gutturnio on the other hand is more reminiscent of the dry Buttafuoco style. More information about wines from Lombardy can be found here. 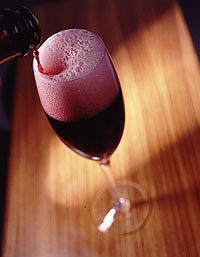 There are a number of interesting legends surrounding this wine. Literally, it means "Blood of Judas" (that's not to be confused with Jesus). Why? Well in Italy blends or mixtures of straight varietals take on different names depending on the mix and the way the varietals are made into wine.

One legend is that monks in Lombardy used to make wine and the nuns would break into the cellar and have a good time. The monks grew tired of this and marked the barrels with the terrifying phrase "Sangue di Giuda" so they would not have as much disappearing wine.

Another legend is that the name "Sangue di Giuda" was given by friars who disapproved of its stimulating and "aphrodisiac" effects.

Both those myths have one thing in common: the name was given to dissuade people from drinking it, because it was very tasty!